I mark my calendar for 150 days when the ram is put in with the ewes. According to the calendar lambs were due this year between March 1 and March 15. However, evidently my ewes are not real good at counting days. I went out earlier today to check for eggs and thought I heard a lamb. Changing direction I headed for the sheep pens and saw that 11 of my ewes were in one corner and 1 ewe was all by herself in a corner across the pen. But on a closer look she wasn’t by herself – there was a small lamb struggling to its feet. As I opened the pen I realized that there were two lambs and then I got close enough to see a third.

Luckily the goat kids moved into their new home over the weekend and left the lambing jugs free. I had cleaned out the jugs but opted to wait to re-bed the shelters and hang water buckets until this weekend. I quickly got some good alfalfa and not so good sudan hay from the barn. I used the sudan to bed out the shelter and put some alfalfa in the feeder. I hung and filled a water bucket and then threw more alfalfa to the rest of the sheep to keep them occupied and away from the gate.

I picked up two of the lambs and carried them into the lambing jugs. Mama ewe started to follow, looked back at her remaining lamb, took a couple of steps towards it and then decided she needed to keep an eye on the two I was carrying. After getting both lambs and the ewe into the lambing jug I went back for the third lamb.

Then I weighed lambs, dipped naval cords and left them to settle in. Two ram lambs – one a respectable 9 lbs, the other 7.5 lbs – and a ewe lamb that weighed 6 lbs. 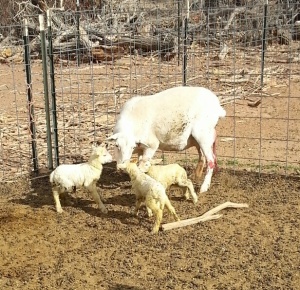 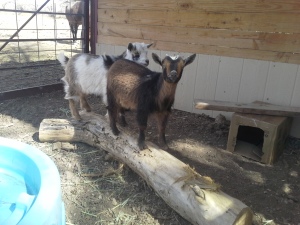 Nutmeg and Spice in their new digs.

Kids are adorable and their antics can make even the most dour person smile. However, there comes the day when ties must be broken.

Dairy does are bred so that they will begin lactation and produce milk. Some people who own dairy goats will pull kids at birth and never allow the kids to nurse directly from the doe. I prefer to keep kids with the doe, assuming she has sufficient milk and allows them to nurse, and won’t start milking the doe until the kids are two weeks old at least. This year the kids were about nine weeks old before I started milking Joey again – moving Joey to another pen during the day, milking her in the evening and then putting her back with Spice and Nutmeg at night.

Now, at ten weeks of age, it was obvious that the nursing Spice and Nutmeg were doing was more of a “comfort” nursing than a need for nutrition. They have been eating hay, along with Joey, for several weeks and keeping them apart from Joey during the day did not result in a weight loss. So it was time for the kids to move on.

While I will get one back in a few months, for now, Nutmeg and Spice are now down the road with a friend so that her daughters can use Nutmeg and Spice in 4-H. Whichever comes back will be used to handling and much easier to train to the milk stand.

It will be quieter out at then pens for awhile but lambing starts next weekend so the lambing jugs will soon be full once again.

Last spring a neighbor’s dog killed all my chickens save one rooster.

I try to raise chicks in the fall so that by the time cold weather hits they are fully feathered and by the time there is sufficient daylight they are old enough to lay. (Most breeds of chickens start to lay between 20 and 24 weeks, although some breeds used by commercial farms will start to lay at 16 weeks.) So early last fall I purchased a “Rainbow Layer” assortment of chicks from a hatchery in the mid-west. This assortment guarantees at least five different breeds of chickens from breeds that will lay white, brown or green eggs, hence the name “Rainbow Layers”.

The chicks were duly delivered a couple of days after hatching and a friend picked them up at the post office (long story) and brought them to me.

I had the brooder all set to accommodate the new chicks and several times a day for the next few weeks Tuck and I went out to the chicken coop to make sure the chicks were warm enough, hadn’t fouled their water and still had feed. The number of trips to the chicken coop lessened as the fall turned into winter, the heat lamp was turned off, and the chicks went from eating chick starter to chick grower. I’ve never understood the phrase “eat like a bird” for in my experience chickens are voracious eaters and the 25 chicks were easily eating 25 lbs of feed a week by the time they were three weeks old and by the time they were 12 weeks old that had increased to 50 lbs a week.

As January rolled into February the days started to lengthen and soon there was enough daylight to stimulate egg production. Then it just became a matter of waiting until the pullets were old enough to start laying. Finally today one of my pullets laid an egg. 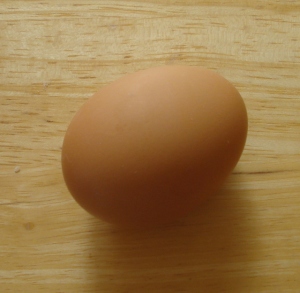 The color of ear lobes of the hen are supposed to be correlated with egg color so I was expecting some white eggs and since usually white egg layers start to lay at a younger age than brown egg layers, I was expecting the first egg to be white. Now that one has started the lay the rest should follow suit.

To welcome Nougat to Quibeyn Farm and in honor of the upcoming spring (hopefully), a special offer through the month of February is available on goat shares. Contact me at (remove spaces) quibeynfarm @ gmx.com for more information.