Since finishing the perimeter fencing I have not (knock on wood) had a problem with coyotes so I have started leaving the pop hatch open and the chickens can leave the coop when they want every morning. Usually that means that the chickens are behind the house or out at the animal pens when I go out to feed. However, since they know that I stop at the chicken coop on my way to the barn to throw layer pellets, when the chickens see me come out of the house they usually start running to the chicken coop ahead of me. Every morning I count chickens just to make sure I’m not losing chickens to predators. In the last three weeks I’ve often been short one hen. Initially it was every other day that my count was one off and then it seemed I was off one chicken for several days in a row. Losing hens when you free-range is not unexpected so I figured the hen had indeed been picked up by a predator or otherwise gotten herself in trouble. While I briefly considered that she might be sitting on a clutch, I discarded that idea pretty quickly as in all the years I’ve owned chickens and with all the different breeds I’ve owned, I have never had a hen go broody. Years ago I had a Rio Grande Wild Turkey hen sit on a clutch of chicken eggs and hatch out seven chicks. She later lost her life to a coyote protecting “her” chicks. But I’ve never had a hen sit on a clutch of eggs.

So this morning when I counted chickens and came up with nineteen, I counted again. Sure enough the hen was back and she had brought along two new additions with her. 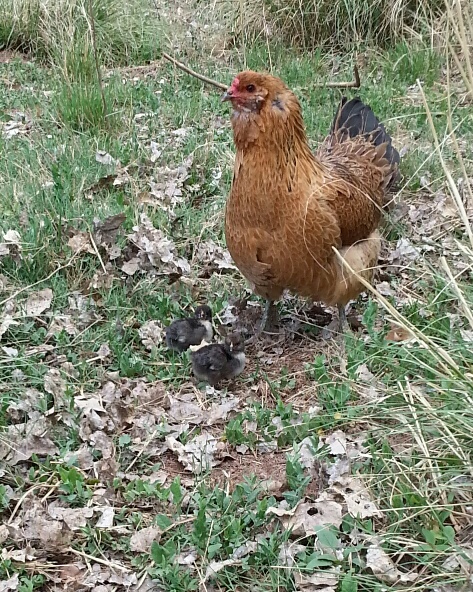 I had called a driller last December to get on his schedule to have a new well drilled. In early January I made the dreaded trip to the State Water Engineer’s office for the required well permit. After much delay, the driller and equipment finally made an appearance last week. A couple of friends had helped me take down the fence along the drive so that the drilling equipment could reach the area where the new well was going to be dug. It needed to be close to the existing well and pump house to minimize costs of hooking the well into the existing lines and electrical system.

Three large trucks and an equipment trailer were backed into the area and the drilling rig was set in place. 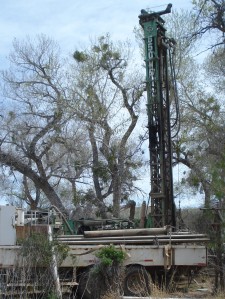 Shortly after drilling commenced, water and mud started bubbling up in the surrounding area (thank you gophers) and the driller hit water at about 15 feet. 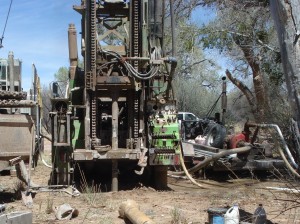 Though I live in a desert and we have had drought conditions for the past several years, I also live close enough to the Rio Grande that hitting water wasn’t considered to be a problem. The difficulty was going to be putting in a well which didn’t have sand issues. At 65 feet, gravel was hit but there was a lot of sand as well so the driller kept going. The sand and gravel coming out of the hole was pumped up onto a truck and then off the side.

At 96 feet it appeared the gravel was good enough to place the casing. The driller was predicting the well would be cased by the end of the day and all was well with my world. Then I went out about 4 pm and thought something didn’t look quite right. A lot of white pipe covered with mud was being brought up. Granted I know very little about drilling and wells in general, but I was pretty sure the casing was supposed to be going down. The driller saw me standing off to the side and came over to talk with me. No good conversation ever begins “that has never happened to me before.” Evidently when they started to clear the well, fine sand clogged the perforations in the casing and the pressure caused the casing to back out of the hole. After all the casing was out, they called it a day, promising to return the next morning. The fix was to drill a little deeper before trying to case the well. Here water is coming up.

I watched a fountain of water and ventured to ask if they were trying to run the well dry. The driller laughed and said they wanted to make sure the water was clear. He said it looked like an excellent well. I then asked if they were at all worried about the fact that a whole lot of water was turning the immediate surroundings into mud and there were some very heavy trucks parked on that ground. He assured me they wouldn’t get stuck – famous last words – it took several railroad ties to get the first truck out so they could then use that truck to pull out the other two trucks.

Yesterday a different company came out to put in a submersible pump and lay pipe from the well to the existing infrastructure.

The backhoe operator very kindly filled in the ruts left by the drilling equipment.

I came home yesterday evening to find my best ewe, No. 86, who normally lambs triplets, and one year twins, had lambed. Surprisingly, this year she only had a single. However, a large single – an 11 lb ram lamb.

I put her and her lamb in the lambing jugs overnight and this morning I ear-tagged all the lambs (yellow for ewe lambs and white for ram lambs) and then turned everyone out with the main flock.

Some random photos of the lambs in the main pen. 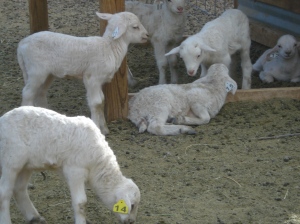 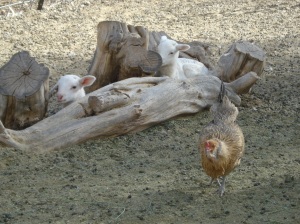 Excellent place to hang out and not get trampled

Now that ewe 102 got the ball rolling on April 1st, the sheep are lambing on the usual schedule – one or two ewes will lamb every day.

Saturday afternoon I went out to get a goat to milk and found a 2014 ewe, which I was pretty sure had been bred, lying on the ground moaning. Since my older ewes all lamb with relatively little fuss, I was a little concerned that this ewe might be having problems, especially she was a first time mother and all the lambs to date have been large. However, when I went into the sheep pen to check on her, she was having none of it. She heaved herself up and turned around to run. It did give me an opportunity to see that there were two small hooves protruding. As it turned out, my help was unnecessary and she did deliver a 10 lb ewe lamb on her own.

Sunday morning I went out to find another ewe had delivered twins. This was a ewe I had kept from my first lamb crop because she was a triplet. Ewes from multiple births are more likely to also birth multiple lambs, and hence are the ones you want to breed. However, despite the fact that this ewe had the genetics to twin, she has never given me more than a single lamb. Evidently she knew she had made her way onto my short list of ewes to replace and this year she gave me twins – both ram lambs and 9 and 10 lbs respectively.

I came home just before midnight on Friday and even before going into the house to change I headed to the sheep pen. I found a ewe in the small pen, along with two lambs. Another ewe was on the other side of the cattle panel next to a lamb and the rest were all bedded down in a group on the opposite side of the big pen. My first thought was that a ewe had lambed twins. However, when the light landed on the ewe, she started to move and both lambs bolted to their feet. One headed to the ewe and the second tried to climb through the cattle panel to the other ewe. It seemed to be having problems and I was afraid it was going to hurt itself, so despite the fact that I was in a skirt I opened the gate and headed into the sheep pen. The lamb had finally gotten through and was standing next to the ewe that had been on the opposite side of the fence. While I would normally have put the ewes with their lambs into the lambing jugs, since both lambs were dry and had obviously been up to nurse, I decided it could wait until morning. Plus, there was this little niggling voice asking how certain was I that I had two ewes, each with a single lamb.

Sure enough, when I went out this morning, it was obvious that only one ewe had lambed and that both lambs belonged to her. After feeding the sheep, it was a simple task to scoop up both lambs and carry them to the lambing jugs with mom following behind. If I had put both ewes in separate lambing jugs last night, it is very likely I would have lost the lamb I had assigned to the errant ewe. When there is no imminent danger, I’ve learned that a wait and see approach is usual the best.

I have been expected sheep to start lambing since March 5th. Every day the sheep got bigger, some started to bag up, but no lambs. I took a break mid morning and went out to check on sheep. All the sheep but one were together. The sole sheep apart was pawing the ground, circling and doing much of the behaviors I associate with an imminent lambing. I headed to the barn for some hay, figuring I’d need to move the other sheep away from the gate so I could move the ewe and lamb(s). Sure enough, when I got back from the barn, there was a lamb on the ground being cleaned off. I moved ewe and lamb to the lambing jug which I had prepared with fresh bedding, hay and water and decided to hold off for a while before weighing the lamb, dipping the cord, etc. I went back out about 15 minutes later and found a second lamb being cleaned off.

The first lamb was a ewe lamb, about 8 lbs. The second was a ram lamb, about 9 lbs. Both have been up and nursing. 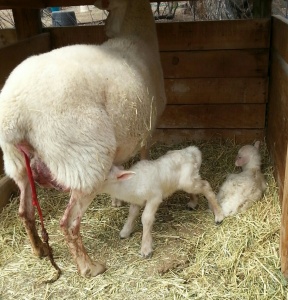 Ewe lamb having her first meal